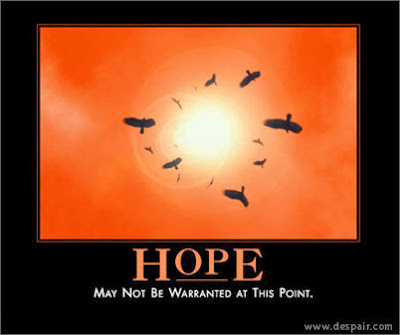 THE CASE AGAINST HOPE
Regarding the fate of humanity, let me argue the other side, not for hope but for despair, not for comedy but tragedy.

Let me say that the chances seem slim of our waking up and growing up to a sufficient degree of collective sanity to save our race from what in our disposition is inclined to omnicide.

Too much power controlled by too much egomania and too little wisdom will likely end Life’s experiment in advanced intelligence on Earth. Before our intelli- gence can advance to wisdom, grosser human motives, armed by unscrupulous science, are likely to let all hell break loose and havoc reign.

It’s not that there aren’t glints and glimpses of compassion, sanity and wisdom to be seen in our history, in our scriptures, and in many saints and sages living even now. There’s wisdom in our midst, but few to see and follow it.

And wisdom can’t be rushed, it seems. It is a kind of ripening and maturity to be seasoned into by experience, a developmental stage transcending earlier stages, each needing to be lived through, but often not, and thus is wisdom thwarted.

Many, too, are the mad pathologies that plague and stunt us in our wising up, keeping us mean, self-centered, and fatally short sighted.

Is there, though, a way to wise up faster, to waken and ripen multitudes of people to a new level of enlightened consciousness that transcends pathology and nurtures compassion and altruism and harmonious community, where ego previously ruled?

Many religious revival movements in the past have swept societies toward sanctity and sanity, though not for long, once short-winded enthusiasms have puffed away, and the wasteland underneath the glamour reappears.

What then might we barely hope for, in the face of such long odds?

Hope for wising up yourself as well as you can, and helping others to do likewise. Study what it may mean to grow wiser. Study those who appear to have reached higher levels of consciousness and who practice behaviors expressing such enlightenment. Follow their examples and advice. Walk in their ways.

Then hope against hope for the best.