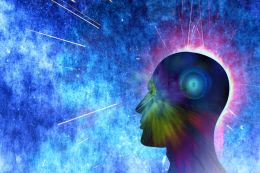 SHIFT
My worldview’s slowly turning upside down,
My paradigm is shifting inside out,
Now everything’s a verb that was a noun,
And former certainties are cast in doubt.

Once everything was mass and energy,
Which laws of physics tidily described,
And “Spirit” but an antique fantasy,
Delusion from what maniacs imbibed.

Despite what cautionary skeptics urge,
Materialists insisting there’s no more
Than meets the eye, who eagerly would purge
The metaphysics mystics still adore,
I’ll cast my lot with visionary folks
And be the butt of blind men’s jibes and jokes.