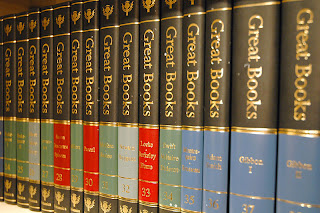 “LITERACY FOR LOVE AND WISDOM”

I decided to become an English major in college because the literature I’d read and studied by that time had touched, moved and inspired me, occasionally even transporting me to realms of wonder and glory.

I enjoyed reading fiction and poetry (some much more than others) and could think of no other field I’d rather to play in (though both philosophy and psychology also beckoned).  And I preferred the metaphor of field to the sterner word of discipline.

Yet what I found out as I pursued college courses in English was that the “discipline of English” was rather more like science than sport, more rigorous analysis than larking about in joyful ecstasy—the kind of feeling I’d had when reading Emerson and Frost in high school, or Ray Bradbury and Isaac Asimov as a young teenager.

Studying the science of literary analysis was the price I had to pay to graduate as an English major: learning to discuss techniques with technical terms, and literary motifs more than human motivations.  Writing analytically and critically rather than emotively or impressionistically was how we played the lit-crit game of dissecting literary specimens.  We studied specialized “approaches” to literature, various critical “methodologies,” from the historical and the moral to the very latest mode then (which never quite found a name): the New Critical method, all the rage in the ’50’s.  Since then, of course, have evolved a plethora of esoteric postmodern literary-critical methods: psychoanalytic, Marxist, new historicist, structuralist, deconstructionist, feminist, and post colonialist, for example—all requiring careful indoctrination into the specialized terminologies of each tribe.

More heartening to me, however, has been the parallel development over the last fifty years of creative writing programs in colleges and universities, which permit students smitten with literature to make some of their own, usually in imitation of contemporary idols and fads.  At least, though, they get to feel their way into the methods and manners of the models they emulate, rather than detach themselves academically as clinical, critical observers of specimen texts.

It seems to me that the aim of developing a “Literacy for Love and Wisdom” is to respond to the disheartenment I’ve felt over the last half century as an English major, teacher and professor: the disappointment that talking about being “touched, moved and inspired” by reading literature has been dismissed as simple-minded “impressionism,” unworthy of well-credentialed professional literary analysts who must compete for credibility with sophisticatedly theorized colleagues in rival disciplines.  We’re supposed to develop our intellects, think with our heads, not—gasp!—feel with our hearts.

To such ears, “literacy for love and wisdom” sounds oxymoronic, because literacy means learning literary theory and critical methodologies, a job for professionals, not amateurs, i.e., lovers.  Love and wisdom are nebulous notions, finally undefinable, not the stuff of knowledge—more gnosis than knowing, subjective not objective—not science.  Yet scientism is our ruling Western ideology, and it does not admit of epiphanies.  It does not credit heart-knowledge, even though love and wisdom arise in our hearts as the fruits of intuition not cognition, of empathy not theory.

But the adolescent lover in me of Emerson and Frost (one who later grew to love Chaucer, Shakespeare, Milton, Pope, Wordsworth, Dickinson, Austen, Brontë, Bishop, and many more enchanters) still endorses as valid and valuable our efforts to encourage students to be touched, moved and inspired by the affecting literature of Great Books.
*
Posted by Alan Nordstrom at 12:29 PM