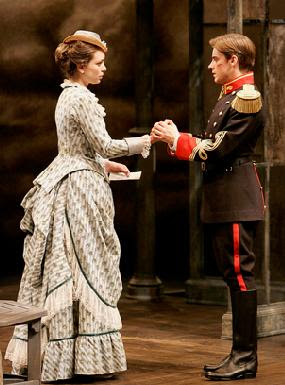 HELENA: HEALER AND SAVIOR
Helena (in Shakespeare's All's Well That Ends Well) is, of course, far better than Bertram deserves. He is as outrageous in his headstrongness as is Kate, the Shrew, in hers (in The Taming of the Shrew). Both these extravagant souls need taming, restraining, civilizing—curing of their temperamental maladies so as to bring them to sanity and clear-sighted recognition of what is truly valuable—true love. In both cases extraordinary means must be used to rein them in and cure them.

Just as the God of Christians looks with sorrow upon all soul-sick, wayward human beings, knowing them intrinsically defective, damaged by the primal disobedience of Original Sin—yet nonetheless graces them with charitable care—so Helena loves Bertram for the goodness he was meant for, despite his callow lapse from grace. She knows a natural nobility inhabits him that may yet be reclaimed, despite his willful dishonoring of his heritage and nature.

A just God would condemn Bertram for his devious egotism, but a merciful God excuses the willful blindness of his youthful pride, lust and rebellion, generously bestowing on him the healing love of Helena, a paragon of devotion. Though more than he deserves, she’s what he should have prayed for.