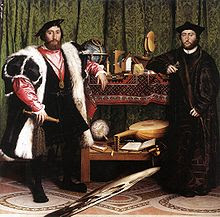 EYED AWRY: THE SHAKESPEAREAN PERSPECTIVE
Like perspectives, which rightly gazed upon
Show nothing but confusion, eyed awry
Distinguish form.
The tricksy anamorphic art Shakespeare knew of and alludes to in his plays and sonnets, those ambiguous images that create different impressions depending on one’s angle of view—“painted one way like a Gorgon, The other way's a Mars”—such graphic art is emblematic of his own dramatic art.

Tragicomic plays are a simple and obvious example (such as The Merchant of Venice, Measure for Measure, All’s Well That Ends Well, and The Winter’s Tale) in that severe and ominous events in the early part of each play, portending a catastrophe, suddenly shift before the end to allow all to end well, as a tragic perspective shifts to comic.

More complex instances of Shakespeare’s anamorphic perspective appear in plays that represent a deep existential ambiguity in the very nature of the world—as does Macbeth. Here there’s no confusion about genre; clearly this is tragic drama depicting the fall of a great man from high to low estate in mind and body—a classic Aristotelian paradigm of tragedy. What is intentionally ambiguous, though, is how we ought to comprehend the instigation or the etiology of Macbeth’s fall.

One way is to notice the fateful temptations of the three weird sisters and conclude that wicked machinations cause a good man’s downfall, and the devil made him do those manifold evils he goes on to do. But a contrary way to reckon these tragic events is to take the perspective of illness rather than of evil—to see a mind diseased, even to madness, rather than malicious. Call that the ambivalent perspective of e’il/ill, a kind of pun delightful to the paronamasiastic mind of Shakespeare.

Of course, such a dichotomy finally proves false, for a comprehensive view allows us to see not either/or but both/and. “Two truths are told,” and though they appear opposed, they prove complementary—a valid contradiction, not unlike a paradoxical Zen koan.