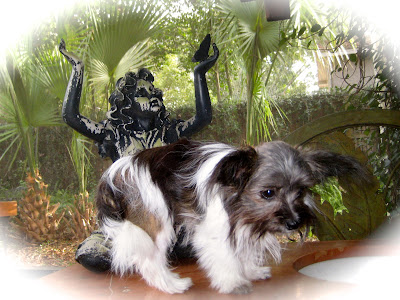 Part dog, part gremlin, little Tiggy seems
A canine you’d imagine in your dreams,
With ears that bend and swivel like a bat’s
And a scamper faster than a junkyard rat’s.
Yet nothing ominous or nasty is
Apparent in this little tricksy whiz
Who zips about the house and bugs poor Gyp,
Our matriarch, who’d probably like to nip
Her butt and put her in her place, but lets
The little terrorist persist, who gets
Away with mischief just because she’s cute.
Most any other pest would get the boot,
But Tig has somehow learned to cast a spell—
More elf than fiend, from heaven not from hell.