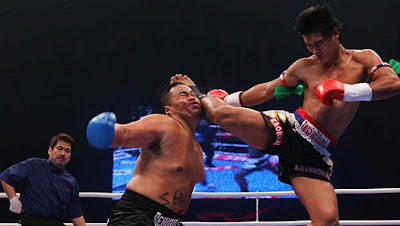 MUAY THAI
My student Oscar, a mild-mannered undergraduate, serious in his studies as an English major, and talented as both a scholar and writer, is also, I recently found out, a world champion in the martial art of muay thai.

The same young man who wrestled last year with the whole of Milton’s epic, Paradise Lost, and is presently practicing the gentle art of personal writing, diverts himself in his off-hours with kicking and boxing hostile contenders in the fight ring, a fact Oscar casually mentioned and then wrote a personal essay to illustrate.

When I Googled muay thai, I found You Tube clips of this (by my reckoning) brutal sport.  For me, boxing is more than bad enough, but add hurling feet and legs to the fighter’s arsenal, then the prospect of horrific injury multiples.  A whirling kick to the neck of your adversary looks capable of decapitation or, at the least, cervical trauma lasting a lifetime.

But is this any way to behave for a peace-loving person, even if only a spectator?  How can someone who advocates non-violence condone such a “sport,” much less take pleasure from either performing it or watching it?

That’s the dilemma I feel when confronting muay thai or boxing or any other brutally aggressive, war-like sport, such as football.

Using violence in self-defense against a criminal assailant may be necessary at some time, yet regrettable, and no occasion for exultation.  That would be self-preservation, not sport.

The best kinds of martial arts I know of, such as ju-jitsu and aikido, are purely defensive, not aggressive.  Their whole motive is to foil an attacker by turning the antagonist’s force against himself and thereby proving his violent intention pointless.  The practitioner’s motive is more like teaching than beating: persistence is futile.  \Whereas in aikido there’s a bad guy and a good guy, in muay thai there are two skillful brutes battering away at each other until somebody breaks.

Why would you want to hurt someone else?  There may be many answers to that question, but are there any good ones?