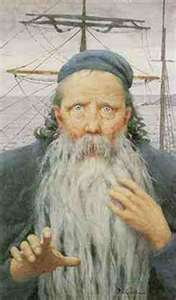 FALLING OFF
Though he had many sins to be forgiven,
The old man never thought he should be shriven,
But went his own way, negligent as ever,
Determined in his errors to persever.

Though current memories no longer lingered,
The past he knew too well and always fingered
And, like the Ancient Mariner, recited
To passersby what left them undelighted:

Old stories of sea battles and ships sinking,
Which recitations came as close to thinking
As his old brain could summon in its falling,
A spectacle both rueful and appalling.

His fondest dream—to wake to eggs and bacon
And then, on his last day, not to awaken.