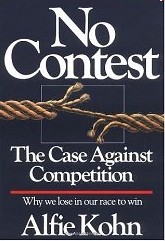 NO CONTEST IN PARGONIA
A prime principle in Paragonia is that all conflicts need to be resolved amicably.  The defunct notion of “letting the best man win” in an adversarial contest has died with the demise of Empire.

Wars have ceased, and so have what William James called “the moral equivalent of war”: sports.  Athletic contests and rivalries, so much a part of ancient and modern culture, have faded in the light of wiser understanding.  The closest surviving vestiges of athletics are “martial arts” (now recognized as an oxymoronic term) like aikido, in which the aim is to demonstrate humanely the futility of aggression—conflict resolution in action.

While Darwin’s “survival of the fittest” maxim aptly depicts more elementary levels of natural evolution and seems to privilege power, violence and dominance; optimally enculturated humanity transcends such primitive paradigms, having learned to live in concord, in the harmony of partnership, where respect rises above rivalry, sharing out-shines hording, and serene modesty prevails over arrogance.

Jesus, Lao-tse, Confucius, Gandhi, Mother Teresa and their kind turn out to be the templates of the Culture of Cooperation in Paragonia.