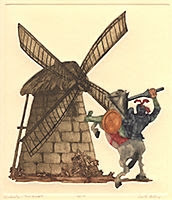 IS DAVID KORTEN TILTING AT WINDMILLS?
Notoriously, we human beings have a penchant for demanding services from others, starting with breast milk and clean diapers; yet our survival requires just such imperious expressions of ego, and we’re genetically wired for tyranny.  That’s a given of our nature.

Culture, though, immediately begins to modify our inborn nature, and some cultures, particularly the micro-culture of one’s family, will shape our innate tyrannic tendencies, reinforcing or subduing them, as the case may be.  Polite, gentle, self-restrained is as much a personality profile to be enculturated as selfish, aggressive, and domineering, even through innate dispositions one way or the other are factors to be accounted for.  Males, on average, may be more inclined than females to use force to get their way, as a function of hormonal makeup.

Assuming this premise, then, of our adaptability, I would say that David C. Korten, author of The Great Turning From Empire to Earth Community, rightly makes the case that imperialistic cultures, though deeply entrenched in our history and presently dominant globally in the form of multinational corporations, may theoretically be modified to communitarian cultures that are based on fundamentally different values than imperialist motives.  Hypothetically, at least, we might imagine that the genocidal logic of Empire, now madly devouring Earth’s biosphere, may give way to the sanity of collaborative and partnership cultures that work for the benefit of all—for Earth’s viability as a unique planet.

Such, I think, is Korten’s central argument and the basis of his optimism that humanity will “wake up in time” (in Peter Russell’s challenging phrase), to reset the calamitous course of our cosmic adventure, a course now leading to the exhaustion of Earth’s resources for sustainable support of our sundry, precious populations.