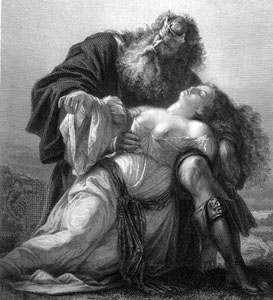 A PARAGRAPH ON KING LEAR
One reason King Lear is regarded by many as Shakespeare’s greatest play is that it deals centrally with the fundamental human dilemma of egotism vs. altruism, the perennial conflict between the demands of the self and the needs of others.  According to our most revered teachings, wisdom entails selflessness, a kind and generous concern for the well-being of others, even at the cost of self-sacrifice.  At the tragic end of King Lear, Cordelia, the play’s purest example of selfless love, lies like a sacrificial lamb in the arms of her father, dead but sanctified.  Even though the old, wretched king has now but minutes left to live, we see that he is cured of the rash, demanding self- centeredness that possessed him at the drama’s start.  This fond and foolish old man has won his way to wisdom, the wisdom of selfless love.  The tragedy is what his former folly cost.
*
Posted by Alan Nordstrom at 3:58 AM