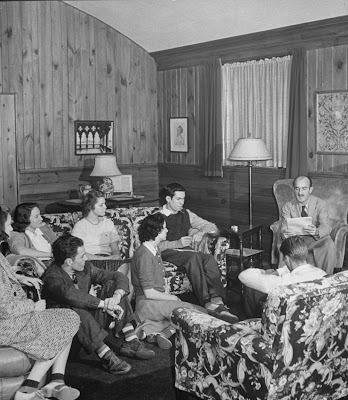 WHY WE READ ALOUD
When studying poetic or dramatic literature, of first import is to inhabit the text before talking about the text. First you must live your way into the lines, as a actor would, even to the point of memorizing them, or at least learning to say them as if they were your own natural speech, saying them (by Hamlet’s instruction) “trippingly on the tongue.” Great literature deserves no less from you than oral possession.

Only after you have internalized the passages, savored them, owned them, have you then earned the right to stand back from them, see them in their larger context, and reflect on issues of artistry and significance. Only then should you talk about thematic relevance, symbolic implication, and psychological or dramaturgical perspectives. Then you can play the scholar and the critic. But assimilating the lines into yourself comes first.

Which is why we devote much class time to demonstrating how well you have taken possession of, say, Chaucer’s Wife of Bath or his Pardoner, or have found your way into the hearts of Hamlet, Claudius and Ophelia.

Another way to say this is to liken literary texts and scripts to musical scores, which beg to leap out of their inert ink on the page into notes in the air, vibrant with resonant vitality. Notation is not music, nor is printed text poetry or drama. Only performance transforms them into what they truly are—animated air, impassioned personification, inspired breath.

Therefore, read them aloud. Make them your own.