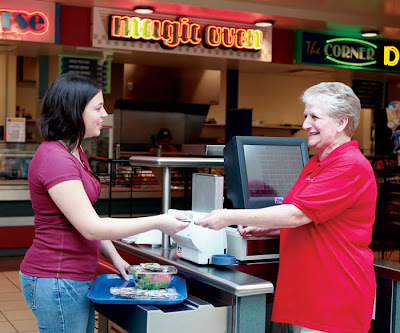 AN EXEMPLARY DIGNITARIAN
What’s fundamental to all dignitarians is their full respect for the human rights of others, respect for their inherent worth, equal to others. However, some dignitarians go further and prove themselves exemplary in their humility and generosity.

I think immediately of Evelyn, a cashier for many years at “Beans,” the Rollins College dining hall. While other cashiers might have smiled and been friendly, Evelyn somehow made all those she served feel better about themselves.

By greeting them personally with endearments like “Honey” and “Sweetie,” and sometimes with details she’d picked up about their lives (“How’d your term paper turn out?”), Evelyn boosted egos and cheered hearts all around her.

More than just acknowledging her customers, she evidently noticed them in particular, remembered them, and cared about them.

It’s one thing to respect the basic kinship of all human beings, but another to be kind to them, as if they were your kindred.

And that’s what Evelyn did.*


*Regrettably, the photo above is not Evelyn and not at Beans, but it's a reasonable facsimile.
Posted by Alan Nordstrom at 4:27 AM