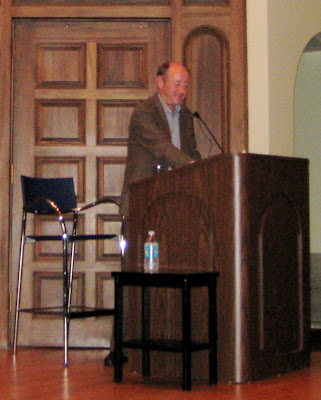 AT EASE WITH BILLY COLLINS
Billy Collins, in person or in poem, makes you feel welcome and comfortable.

His persona is amiable and easy going, with a quick smile and often a twinkle in his eye. You sense that soon you’ll be chuckling at something witty he’s said or made you say. His demeanor is unassuming, that of a regular fellow content to be quiet while others talk and he politely listens. His charisma is low voltage, but charisma nonetheless, not scintillating but charming.

If Billy Collins were a salesman, you’d buy, feeling that he’s simply helped you make the right choice and become a grateful customer.

In fact, he is a salesman, selling you on his poetry, and each poem is a clever bid for your attention first, and ultimately for your affection. You wonder just why you find his little poems so beguiling. What has he done, you wonder, that’s like the Whitman’s chocolate sampler which keeps you nibbling one and then another?

It was matters like this that Billy Collins chatted about on September 11th to a doting audience of 200 in Rollins’ Bush Auditorium.

The two-term U.S. Poet Laureate (2001-2003), now an inaugural fellow in Rollins’ new Winter Park Institute, spoke about how a good poet aims to capture “the love of strangers,” how the poet’s well-crafted persona wins over readers, enticing them genially into the little room of each poem.

Good poets are not self-absorbed. They court our caring.

Collins likens his poems to the optometrist’s eye chart, with the big E at the top that most everyone can read. By the end of the poem, though, he hopes to have made us squint, by subtly leading us to sharpen our attention and see something more challenging or see from a different perspective.

First he wins you, then he spins you to a place where “language is better than reality.” 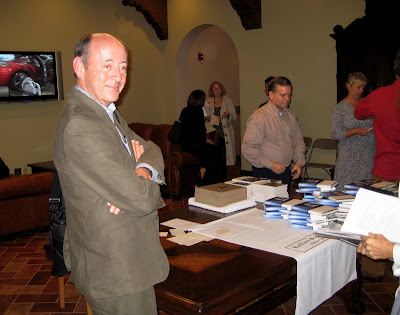 MY INTRODUCTION TO BILLY COLLINS' READING AT ROLLINS COLLEGE,
11 SEPTEMBER 2008

Tonight, we are about to hear a talk by the immensely popular poet, Billy Collins, in which he’ll address the topic of

“The Love of Strangers and the Other Aims of Poetry.”
Most living poets aren’t “popular,” and many would disdain the thought of being popular—much less of aspiring to be so.

Beat Poets of the ’50’s and ’60’s, like Allan Ginsberg and Lawrence Ferlinghetti (both of whom have read at Rollins) enjoyed their ardent, though sub-culturally confined groupies.

But not until Billy Collins rose to become the U.S. Poet Laureate in 2001, and was then offered a second term the following year, has there been an American poet so much loved by both the Poetry Establishment and by the general populace.

One testament to that ardor is Billy Collins’ entertaining visits to the populist precincts of Garrison Keillor’s weekly NPR variety show, The Prairie Home Companion.

How grounded can you get?

Just how does a poet grow so popular and become so beloved of readers and auditors?

And is the love of strangers something of what he’s aiming at when he makes his poems?

That, I believe, is only some of what we’ll find out tonight.

So, too that end, I am delighted , on behalf of Rollins College and of our new Winter Park Institute, to give you—Billy Collins.