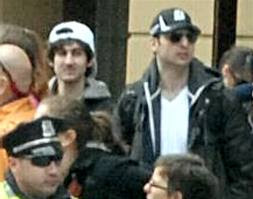 We’re waiting now to hear what he might say,
Now he’s been captured after that horrid day—
The day he bombed the Boston Marathon,
Leaving many wounded and three gone.
His older brother, assumed the mastermind,
Chief terrorist, shot dead, left him behind,
Nineteen years old, to explain their atrocity,
As if the mystery of iniquity
Can ever be revealed, or hearts so dark
Show more of conscience than a savage shark.
And yet most evil men can rationalize,
Gilding their leaden motives with bright lies.
The deepest mystery of all is why
They could not feel the pain of those who’d die.