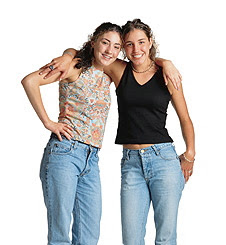 To be a guy or girl, you act a role,
Calling for lots of careful self-control;
Though it may seem spontaneous and free,
There’s discipline beneath such “liberty.”
Two girls will traipse along, their arms around
Each others’ shoulders, while few guys are found
Engaged in such an intimate embrace.
A girl will gently touch another’s face;
For guys, a handshake or a backslap’s all
That is allowed before they hit a wall,
Since masculine decorum is constrained
By attitudes essentially left-brained.
Though right-brained women freely may emote
And show affections, no real guys would dote.