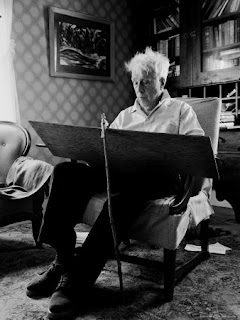 A PRIMER FOR VERSECRAFTERS
The premise of this primer is that crafting verses is a game before it is an art.

While artful compositions may eventually flow from the pens of talented and well-practiced versecrafters, the process begins with fooling around with words, playing games with sounds, while fashioning rhymes and rhythms in the service of many sorts of sense: from frivolous to serious, from light verse and doggerel to odes and epics.

It’s a game of hide-and-seek, with the supposition that a poem's THERE to be found and that it’s your job to follow the clues and hints that rhyme and meter throw in your path, eventually leading you to discover the elusive verse implicit in your unconscious mind waiting to be revealed—AH-HA!

Invention means coming in—you come in to the presence of what you have sought.  Discovery means taking the cover off what already exists, perhaps in some Platonic realm of potentiality, like the horse that Leonardo or Michelangelo envisioned as already dwelling within the block of marble, needing merely to be freed from the rubble around it.

Likewise, the game of, say, sonnet-making proceeds beat by beat, rhyme by rhyme, line by line for fourteen lines, with tinkering and polishing until—Voilá it’s revealed in its entirety—out of seeming nothing: Something.

So go and play.  See what shows up.