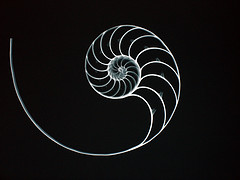 Evolution literally means a turning out, and one image frequently displayed to illustrate the process of evolution is the chambered nautilus, that spiraling sea shell which over time whorls into larger and larger compartments to accommodate the growing mollusk it houses.
Likewise has life on earth turned out into ever larger and more complex forms over the eons since the first micro-organisms emerged from inorganic matter.
While the course of organic evolution during all those eons has proceeded autonomously and unconsciously, a new evolutionary era has very recently begun under the investigations of human motivations and activities, both intentional and unintentional.  And as human science has burgeoned over the last century, most recently decoding the human genome, humanity has risen to a status some have named “co-evolutionary.”  We have now gained the knowledge and the powers to redirect significantly the course of earthly evolution, and we are already doing so, however blindly and unwisely.

The challenge that human intelligence now faces is to proceed in wise partnership with the timeless laws of nature to ensure life’s flourishing on Earth in vast variety, and to cultivate human consciousness to evolve itself to higher levels and more exact and comprehensive understanding.  Because of our immense power now for devastation and the proclivity of aberrant minds to wreak havoc, our first concern should be to understand and cure harmful mental aberrations without squelching the divergent thinking that gives rise to creative and productive thought.

What a potentially wonderful time this is to be alive, just as we unveil the secrets of the evolutionary processes, with the prospect of helping life on Earth to turn out better than ever—co-evolutionarily.
*
Posted by Alan Nordstrom at 4:47 AM