SCRATCHINGS IN THE ATTIC

For longer than I’d let on to my wife, we’ve had critters scrabbling and scratching in the wall behind the kitchen sink, in the ceiling insulation over the family room, and thumping on the backside of the bathtub.

When it seemed they weren’t just wayfarers passing through, but cold-weather residents, I knew I had to act—as humanely as possible. So I picked up the smallest Havahart catch and release trap that Miller’s Hardware carries. It is a boxy wire-mesh cage about ten inches long with 4x4 entrances at each end, over which little spring-loaded garage doors hang ready to clang shut when triggered by a tilted bait tray in the middle of the cage.

All I needed to do was swab a gob of peanut butter on the tray and encrust it with a few of the shelled peanuts we toss out every morning to the squirrels in our backyard.

Carrying the small baited trap to our attached garage where I can climb a stepladder toward an opening to the attic rafters, I set it on a board atop the fleecy, blown-in insulation. Then I carefully pulled down the steel levers that lift and poise both doors, and I hitched them. Any slight twitch of the bait tray would trip the spring and slam the doors, one of which might swat the butt of the wee beastie nibbling peanut butter inside.

Night after night the doors clanged down, as I found in the morning. The nuts were snatched but the thief had fled—once because I’d forgot to set the latches that secure the dropped doors, but often times mysteriously, our best guess being that the varmint was too big and the door couldn’t drop far enough to latch, so he dined, cleaned the whole tray in fact, then backed out to freedom.

What were we dealing with—mice, citrus rats, squirrels, a possum, even a raccoon? Each of these creatures traipse through our yard at night, and our guardian barred owls can’t eat them all. I’d thought small at first, judging by the wall and ceiling skirmishing I’d heard. But a bait tray licked clean of peanut butter boded bigger.

A bigger trap, then, seemed in order, up from the $17 to the $30 model in the same design, only fiercer and louder, and a more formidable jail, if only it could incarcerate the malefactor.

My wife, now apprised of what I was about, grew scareder every day as night by night the trap was looted but untripped and empty. Once, as before, I had failed to set the locking latches. But another time, when I’d secured a roll of string cheese with tough packing tape around the middle, the trap remained open while both ends of the cheese roll were gnawed off. Then I discovered how to set the trigger more sensitively.

Tonight, at last, after a week of fruitless attempts, I nabbed him, or one of them. And, despite my wife’s inflamed fantasies, fomented by exterminators’ web sites she’d been scouring, it was wee indeed: no more than five inches of furry brown body and another five of worm-like tail. He had satellite dish ears, half a dime’s size, two ink-drop eyes, and a pink scrape on the bridge of his nose (not caused by the cage door’s slamming, I hope).

He was timorous in my flashlight’s beam, shining through the cage grate, but not terrified. He’d eaten much of the peanut butter and all but one of the embedded nuts. And he’d begun decorating his new abode, having reached through the grates to pull in clumps of white batting from the surrounding insulation, hunkering down, I guess, and making do.

It was 3 a.m. and I’d come down stairs to check the trap. Our protracted battle of wits was giving me greater admiration for my opponent’s cunning, as well as a game-like eagerness to see if my strategizing had finally worked.

That he turned out so small was amusing, and that he was cunning in another sense, and spunky, made me want to look out for his welfare, so I gently climbed down the step ladder hoisting his outsized cage by its roof-top handle as he scibbled about inside.

After flashing a couple of photos of him in his jail on the hood of our garaged car, I toted him in his cage like a salesman’s case down our lamplit street toward the lake. In a leveled lakeside lot with plenty of overgrown shrubbery, I released him on the walkway of the salvaged boat dock. He scooted directly to the edge and jumped a foot down into a sandy puddle, vanishing into the reeds. In my pajamas, robe and slippers, I trudged up-hill homeward.

Now for his mate to share his fate. Tomorrow night, we hope. 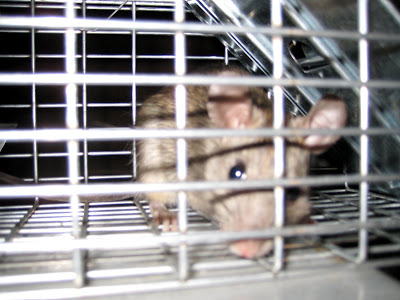 Posted by Alan Nordstrom at 4:11 AM